As Secretary of State for Justice you will no doubt be aware that the case of Elliot Morley and others is currently being considered in Court 11 at the Old Bailey.

Unfortunately the question in not whether the defendants are guilty or innocent of fraud charges.

In fact the matter being considered is whether the defendants can actually receive a fair trial due to all the publicity.

I realise that principles are important, but my concern is because the majority of this process is being funded with still more money from the public purse and implemented with a significant lack of public awareness.

Furthermore I suspect the expenditure claims total is now insignificant when compared against ever-increasing costs to the public purse, and we have not had a single trial yet.

I do not see openness and transparency here and I feel sure that you will agree that there is a need for questions to be both asked and answered.

I look forward to hearing from you promptly.

Somebody discretely moved the hearing listed for 26 November 2010 from Southwark Crown Court to the Old Bailey.

I made my way to the Old Bailey on (26/11/2010) to see what Elliot Morley and his friends had to say about their expenses.   Although I was waiting on the staircase at 11.30am, I was not allowed into the gallery public area until after the case had commenced.  Elliot and his friends were not in attendance, but there were maybe ten barristers in total (well they all had wigs anyway) and of course the Judge in his fine robes.  There was only one court reporter and three members of the public (including myself) to witness yet another page added to a famous and long running case.

The issue under consideration now is whether or not the accused could get a fair trial rather than if they are actually guilty or innocent.

From midday onwards in Court 11 the barristers were presenting a case along the lines that the media coverage (especially the internet) has been so intense and prolonged that the defendants could not possibly get a fair trial.

The assertion was that due to all the coverage the jurors would not have open minds, and any Judges Directions at the beginning of the trial could not influence the jurors’ thinking to ensure fairness of judgement.

Unfortunately I was asked to leave the public gallery at 4.30pm because the security staff were at the end of their shift even though the hearing continued for another hour.  (No comment here)

- and we (the public) are still waiting for a trial.  Filibuster experts perhaps?

In January 2003 hundreds of households downstream of Windsor suffered serious flooding for the first time since 1947.

As Minister responsible for flooding, Elliot Morley stated that the newly built Jubilee River was not to blame for the flooding.  He rejected calls for a public inquiry and called for a stop on the blame game.  See what Elliot Morley said in March 2003 at the bottom of this page.................... 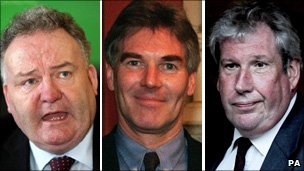 Supreme Court President Lord Phillips has said parliamentary privilege does not protect MPs from being prosecuted for "ordinary crimes".

Last month the court rejected a bid by three ex-MPs' to have their cases heard by parliament, not the courts.

He said the ancient right was meant to protect Parliamentary business from interference and claiming expenses did not "form part of of this business".

They had argued that Parliamentary privilege, which protects MPs from legal action arising from events in Parliament - should apply to expenses.

The Supreme Court rejected that argument on 10 November.

Explaining the unanimous decision by a panel of nine senior judges, Lord Phillips said the case had raised a "novel and important question of law", as for many centuries courts had recognised there were some parliamentary activities they could not inquire into which fell within the "exclusive cognisance" - or jurisdiction - of Parliament.

Lord Phillips said: "Parliamentary privilege is essentially concerned to protect from interference the business that Parliament exists to conduct, in particular the legislative and deliberative debate and discussion that takes place on the floor of the Houses or in Parliamentary committees.

"Making claims for allowances and expenses does not form part of this business. It is an incident in the administration of Parliament.

"Parliamentary privilege has never prevented the prosecution of Members of Parliament for ordinary crimes that are not connected with carrying out the business of Parliament."

Former Bury North MP Mr Chaytor, 61, of Todmorden, West Yorkshire; former Scunthorpe MP Mr Morley, 58, of Winterton, north Lincolnshire; and former Livingston MP Mr Devine, 57, of Bathgate, West Lothian, are all on unconditional bail and face separate trials. Mr Morley's had been due to start on 22 November but has been delayed.

In the Supreme Court hearing in October, Nigel Pleming QC, representing two of the men, told a panel of nine Supreme Court Justices that their appeal was "not, and never has been, an attempt to take them above or outside the law".

He argued important issues of principle were raised by the case and the allegations had to be "dealt with by the correct law, the law of Parliament" - arguing that only Parliament could question and impugn statements made in Parliament.

He argued that the expenses scheme was created and is administered by Parliament for Parliamentarians: "The administration of the scheme is also entirely a matter for the House of Commons - this extends not only to its creation but to its regulation and enforcement."

All three men were barred by their party from standing again as Labour MPs at the general election.

The charges against them followed a nine-month police investigation triggered after details of all MPs' expenses claims were leaked to a national newspaper.

More on This Story

Three former Labour MPs accused of fiddling their expenses have heard from Supreme Court justices at a ruling why they were not protected by parliamentary privilege.

The three took their cases to the highest court in the land claiming any investigation into their expenses claims and the imposition of any sanctions "should lie within the hands of Parliament".

Citing Article 9 of the Bill of Rights and "exclusive jurisdiction" of Parliament, they all raised a common point of law in their challenge to the nine Justices, claiming criminal proceedings could not be brought because they would infringe parliamentary privilege.

On the Jubilee river, I repeat that I do not believe that it is to blame for the flooding of other communities on the Thames. It was subject to independent planning scrutiny as part of a public planning inquiry, and it is subject to independent scrutiny by our own DEFRA engineers, who are independent of the Environment Agency. Although I accept that hon. Members representing communities on the Thames have put their case in a fair and non-partisan way, I think that some communities and some individuals are engaged in a blame game, and I call on them to stop. All the information on the matter should be made available, and I will take steps to ensure that it is, so that there can be scrutiny by local communities.

As regards the invitation to contribute to an independent analysis, I have no objection to local authorities employing their own independent consultants, but for them to say to the Environment Agency, "We don't believe a word that you say, but give us your money anyway" is not a very attractive proposition. The agency has bent over backwards to try and examine the issue independently and make information available. People need to see that and reach the conclusion that the Jubilee river went through all the proper procedures and is not responsible for the flooding.

As a matter of routine, in every area that was flooded in the January incident there will be an examination of the causes of the flooding and the steps that can reasonably be taken to make sure that it does not happen again. That is part of the response to any flooding incident.