The Jubilee River story - IPSA and the public trust

'If MPs cannot organise their own expenses system, what hope have we got when it comes to flooding?' (Ewan Larcombe) 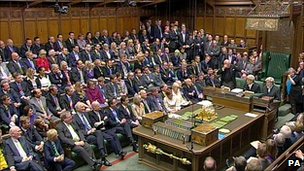 The Independent Parliamentary Standards Authority (Ipsa) was meant to put a dividing line between the discredited expenses system of the old parliament and the affairs of the class of 2010.

But as the organisation releases the first details of expenses claimed since the general election, there are concerns that the extra costs of the authority have not resulted in extra transparency.

Many MPs have little praise for Ipsa.

It is criticism that Ipsa's chief executive, Andrew McDonald, is not afraid to acknowledge.

"I've already said publicly that there are things we've got wrong and I've apologised for them," he says.

"It was a major cultural change immediately after the election where, without any run-in for anybody, either IPSA or MPs, we moved across to a radically different system.

"It's taken time for MPs and IPSA itself to get used to that new system."

IPSA has ironed out some teething problems. Its call centre now handles 130 phone calls from MPs' offices a day, and it processes all claims within twelve days.

Mr McDonald also says it is providing value for money, despite costing £2.9 million a year to run compared with the £2 million cost of the Fees Office it replaced.

"The truth is that we're doing a different job from the previous system," he argues.

"We're an independent regulator. The Fees Office was part of the House of Commons administration. I haven't seen any basis which compares like for like between the Fees Office and ourselves."

But there remains one key concern - the new information released on MPs' expenses claims will not include receipts.

Emma Boon, from the Taxpayers Alliance, says this means MPs could still hide claims for infamous past items such as duck houses and moat cleaning.

"Without seeing the receipts, you're not seeing the full detail of what those costs were," Ms Boon says.

"How can you know whether £100 spent on stationery was an MP's stationery costs for the whole year or whether they bought one very expensive fountain pen?

"Receipts are exactly where some of the best stories and the some of the biggest scandal came out in the original expenses details."

Mr McDonald argues it would cost about £1m to publish the receipts, which would require redacting to make sure no personal details such as bank account numbers and home addresses were released.

"The core information around each claim - what it's for, when it was made and why it was made - all of that will be released from the data on our computer system, so the additional benefit to the public from the receipts is marginal," Mr McDonald says.

"The cost of publishing the receipts so would have been around four times as great as the cost of releasing the data we're publishing."

"If receipts have been presented in order to make those claims, I would say we need to publish those receipts," he says.

"Otherwise, we're back to where we were before - it looks like something's been hidden when indeed there should be nothing to be hidden."

Ipsa may eventually be forced to release the receipts anyway.

"It would seem to me that if I were a member of the public or actually a member of the media and I were curious to know which receipts support a particular claim, then I would make a Freedom of Information Request," Mr Afriyie adds.

The question for IPSA is whether the cost of publishing the receipts, outweighs the cost to its credibility if the details are withheld.

More on This Story