A FORMER leader of Essex County Council jailed for fiddling his expenses has lost an appeal against his conviction.

Lord Hanningfield, 70, who was born Paul White, was convicted of falsely claiming expenses of about £14,000 from the House of Lords.

The Tory peer appealed his conviction for fraud on the grounds that the judge had misdirected the jury, but his case was today rejected by the Court of Appeal.

He is serving a nine-month sentence.

Lord Hanningfield’s application for permission to appeal against his conviction was heard by Lord Justice Hughes, Mr Justice Treacy and Mr Justice Blake.

Lord Justice Hughes said: “We are entirely satisfied that, however sad the background to this case may be, and however sad may be the end of what was otherwise a distinguished career in public service, this jury did receive an accurate direction in law.”

Former Tory peer Lord Hanningfield has jailed for nine months after being found guilty of fiddling his parliamentary expenses.

The 70-year-old former frontbencher, who was also leader of Essex County Council, falsely claimed almost £14,000 for overnight accommodation in London, when on most nights he was returning home to his bungalow, less than 50 miles away from the capital.

During his eight-day trial the jury were told that on one occasion when he had claimed expenses for accommodation he was actually on a flight to India.

He was found guilty of six counts of false accounting in May following a trial at Chelmsford Crown Court and was sentenced at Maidstone Crown Court today.

But just hours before he was jailed for former pig farmer lodged an appeal against his conviction.
Passing sentence, Mr Justice Saunders said he would now be partly remembered as a "benefits cheat".

He said: "While there were ambiguities in the peers' expenses schemes which have resulted in its revision, it was clear from the terms of the scheme, as well as according with common sense, that a peer could not claim an overnight allowance to cover the expense of staying the night in London when he did not stay in London but went home.

"It was perfectly clear from the terms of the scheme, as well as according with common sense, that a peer could not claim for travelling expenses that he did not incur."

Lord Hanningfield, who was tried under his given name of Paul White, was elevated to the Lords in 1998 and served as Tory whip and opposition spokesman on education and transport.

But he became engulfed in the expenses scandal after it emerged that he had claimed thousands of pounds in allowances for overnight accommodation in London, despite being elsewhere at the time.

Under the rules peers could claim an allowance up to £174 a night, without producing receipts, if their main home was outside London and their stay was for the purpose of attending a sitting in the House.

But an investigation discovered that on most nights when Lord Hanningfield claimed to be in London he had been using his chauffeur driven car, provided by Essex County Council, to travel back to his home just 46 miles away.

Lord Hanningfield, who had denied six charges of theft by false accounting, told Chelmsford Crown Court he had made claims for accommodation and travel because “all the other peers were doing it”.

He said: “I do know other peers who made similar claims but I won’t name them.”

During the trial he insisted that his public duties meant he had often been out of pocket and his claims had simply been making up what he had spent elsewhere.

The court heard when he was interviewed by police he told them: “I have done the same as 500 or 600 other peers. I averaged them out because of my expenditure. I have claimed what I thought I could within the law. I have never done anything illegal in my life.”

He added: “I have put so much money into my public life, I regret ever becoming a peer.”

He told the jury: “I do not lead an extravagant lifestyle. Most of my clothes are from Marks and Spencer. I enjoy the occasional glass of wine but that’s about it. I have no savings, no stocks and shares, nothing like that.”

But Clare Montgomery QC for the prosecution said the peer had known that the claims he was making were dishonest.

She said: “On the vast majority of nights he went home to Hanningfield. On the few occasions he did not, he was not in London.

He was variously on aeroplane bound for India or at hotels outside London, all paid for by someone else, mainly Essex County Council.”

The former peer, who lives in the village of West Hanningfield, near Chelmsford, is the sixth parliamentarian to be convicted of fiddling their expenses following an investigation by The Daily Telegraph.

His former colleague in the House of Lords, Lord Taylor of Warwick and four former Labour MPs David Chaytor, Eric Illsley, Elliot Morley and Jim Devine have all been imprisoned for their part in the scandal. 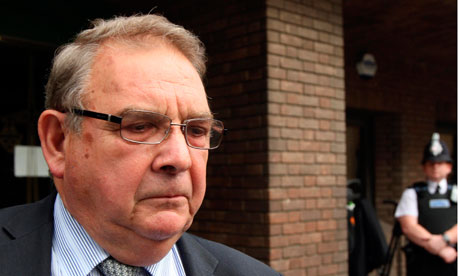 Tory peer Lord Hanningfield leaves Chelmsford crown court, where is accused of falsifying travel and accommodation expenses. Photograph: Chris Radburn/PA
A Conservative peer and former leader of Essex county council was on a plane to India when he was claiming expenses for overnight accommodation in London, a court has heard.

Lord Hanningfield, 70, who is being tried under his name Paul White, made various "false and misleading" claims for travel and accommodation expenses between March 2006 and April 2009, Chelmsford crown court was told.

"We will call evidence to establish that each one of Lord Hanningfield's claims for night subsistence was false," said prosecutor Clare Montgomery QC.

"He never stayed overnight in London at any stage during the period in the charges.

"On the vast majority of nights he went home to Hanningfield. On the few occasions he did not, he was not in London.

"He was variously on a plane bound for India or at hotels outside London, all paid for by someone else, mainly Essex county council.

"The majority of Lord Hanningfield's travel claims in each of the six months were false: either he did not make the journeys he claimed for, [or] if he did make the journey it was paid for by Essex county council."

Hanningfield is charged with six counts of false accounting covering six months of  House of Lords expenses claims. He denies the charges.

Montgomery told the jury of nine women and three men that Hanningfield was not paid for his role as a peer but could claim expenses for travel and overnight stays in London.

The court heard Hanningfield claimed almost £155 per night for hotel accommodation and often claimed £15 for a first-class train ticket between London and Chelmsford and 40p per mile for a 15-mile trip between the train station and his home in the village of West Hanningfield, even though the journey was only 7.5 miles.

She told the jury that when Hanningfield travelled by train he normally paid for his ticket with an Essex county council corporate credit card. When he was chauffeur-driven, the council also picked up the bill, and if he went by taxi it was also paid for by the county council.

"The credit card was used, perfectly legitimately, to claim for entertainment, bar bills, hotels and travel," she told the court.

"The average claim was several thousands of pounds a month. This meant there was little or nothing that Lord Hanningfield had to pay out of his own pocket in relation to his own subsistence or expenses in the periods with which you are concerned."

The trial judge, Mr Justice Saunders, allowed Hanningfield to sit behind his team of lawyers instead of in the dock because the peer has hearing difficulties.

The judge earlier told reporters they could tweet about the case from inside the courtroom.

Hanningfield has been suspended from the parliamentary Conservative party and stood down as a frontbench business spokesman in the Lords and as leader of Essex county council.

He said at the time that the accommodation claims had been made in good faith. The trial, expected to last two weeks, continues.