The EA re-presented the LTFRMS proposals at three exhibitions in Wraysbury, Egham and Molesey - November/December 2011.

There was no presentation at Datchet, and there was also a lack of publicity.

There was little physical change to the material plans, but a significant proportion of the funding now has to be raised from local and private sources.  This point had been made clear in the House of Commons on 23 November when the PAC quizzed Dr Leinster.

The BBC has reported that the funding cuts will delay the project.

The EA appears to have purchased a property on Chertsey Lane where the channel will exit from the Thames.

The EA apparently renamed the project LTFAS in early 2012

The MWEFAS hydraulic models were flawed:  The 1992 PI - Report - 'it would be very embarrassing to all concerned    '

There were three LTFRMS exhibitions - Nov/Dec 2011

View 'For and against the LTFRMS'

I have no confidence in these proposals or the ability of the Environment Agency to reduce the risk of flooding using such complex and expensive engineering solutions!

Some facts about the Jubilee River:

You can see Dr Paul Leinster (EA CEO) being quizzed by the House of Commons Public Accounts Committee here: http://www.parliamentlive.tv/Main/Player.aspx?meetingId=9501

For six weeks I attended the Public Inquiry into the MWEFAS project in 1992.

In my opinion the £300m LTFRMS proposal is just history repeating itself, and worse still the EA is unwilling and /or unable to learn from its mistakes.

The River Thames suffering from benign neglect due to lack of dredging.  The bed is rising with a consequential and significant reduction in conveyance capacity.

Some facts about the River Thames:

Radioactive waste discharged into the Thames (from Aldermaston) for fifty years.

River Thames not dredged for flood defence purposes since 1995.

No facilities for dredging treatment or disposal.

I urge you to check the EA web site maps for all types of flooding in your area.  The insurance companies are using the information supplied by the EA to increase both premiums and excess.  The situation is already difficult, but when the current agreement (about insurance availability) between the Government and the ABI runs out in 2013, things could get worse!

My final point is that you ensure that the gutters on your house are clean and working properly.  The local Council keeps the highway drains clean so that the roads don’t flood, but in contrast the EA (with responsibility for main river flooding) deliberately ignores the Thames, preferring instead to propose extravagant new projects for enhanced reputation and kudos.

Below is a response to the LTFRMS exhibition from Donald Longmore .......

From: D Longmore
Sent: Wednesday, December 07, 2011 11:35 AM
To: lts@environment-agency.gov.uk
Subject: flooding
This in response to a Lower Thames Strategy public exhibition from professor Donald Longmore OBE FRCS FRCR of Chertsey Lane TW18 3LQ.
I am a riparian owner and have lived in my Thames side house for 52 years and have always been involved with the river.
The public exhibition only served to convince most of those present that there are systemic problems in the Environment Agency (EA) because
MOST of the people representing the EA did not know what they were talking about.
With the exception of one engineer hey had two misconceptions:-
a) They believe that the river is self cleaning. It is not and this reach is on average about 1 meter shallower than it was in 1960 therefore its capacity at a flow rate of just 3 knots is reduced by about 900 cubic meters / minute. I appreciate that this extra capacity would not have been sufficient to the accommodate additional flow from the Jubilee River, however a properly maintained river would cause less flooding. There are now so many different excuses given for failing to dredge the river that none are credible. The latest reason given is that there is a “health and safety issue” because of radioactivity in the mud. Previously we were told that there was a European Directive and before that we were told that the Thames Conservancy “overdredged” the river and now the molluscs are used as a reason.
b) They still believe that the Jubilee River would only raise the level downstream by 35 centimetres. The hydrographic study on which this figure is based is unsound calculations and the facts prove so. I have had the sums checked by colleagues at Imperial College who find them laughable.
It would be wiser not to expose the EA representatives to public scrutiny while they are so ill informed. It also creates a bad impression that there are so many staff.
THE REAL ISSUE IS THAT THERE ARE NO PLANS TO DEAL WITH POTENTIAL FLOODING BEFORE 2017 AND THEN THERE WILL BE POSSIBLE FURTHER DELAYS TO STARTING THE RELIEF SCHEME. THIS IS UNACCEPTABLE. SHORTAGE OF FUNDS DOES NOT SEEM TO BE A VALID REASON FOR DELAY. [PLEASE NOTE THAT A MAJOR SCHEME IS UNDER WAY TO REMOVE THE HISTORIC STEPS BETWEEN PENTON HOOK LOCK AND BELL WEIR. THE MONEY WASTED ON THIS SCHEME WHICH HAS MATERIALLY DAMAGED THE APPEARANCE, WILD LIFE, AMENITIES AND SAFETY OF THIS STRETCH OF THE RIVER. WOULD HAVE BEEN BETTER USED FOR FLOOD PREVENTION.
THERE SHOULD BE NO MORE BUILDING IN AREAS WHERE THE RIVER IS EFFECTIVELY SEVERELY RESTRICTED. CHERTSEY BRIDGE IS AN OBSTRUCTION TO FLOW; WHY THEREFORE HAS A MASSIVE DEVELOPMENT BEEN ALLOWED BESIDE THE BRIDGE?

Below is one of the BBC reports 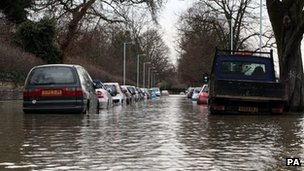 The River Thames burst its banks at nearby Richmond in March 2010, flooding roads in the area

Work to protect 15,000 homes in the Lower Thames area from flooding has been delayed by government funding cuts, residents have been told.

Properties, from Datchet in Berkshire, through Surrey to Teddington in west London were at "significant" risk, the Environment Agency (EA) said.

But it said it only has 55% of funding for the £300m flood protection scheme.

In 2010, the government backed the work but said funding for it should be shared with local authorities.

Kathleen Croft, whose home has flooded three times since 2000, said it was very worrying.

"My business was put out of action for a month and I had to live in one room for five months while the entire house was rebuilt.

The EA has held three public exhibitions this week, at Wraysbury, Staines and West Molesey, to explain the progress of the flood protection scheme.

The scheme was approved by the EA in November 2010 and the Department for Environment, Food and Rural Affairs in July this year.

But the government's Comprehensive Spending review last year said the cost would have to be shared with local authorities through "partnership funding".

Public meetings were last held during a consultation period in 2009.

"When we consulted the public back in 2009 we were fairly confident that the funding would be made available," said EA spokesman Barry Russell.

"Now with the changes in government funding we had our capital expenditure reduced by 27%.

"Also, the government has brought in partnership funding so we are now looking to develop the partnerships that will secure the money needed."

The original proposals dating from 2009 are shown below:

The Environment Agency’s LTFRMS proposal includes spending some £300m of public money building three flood diversion channels (Reach 3 route), improving some existing  river weir structures, providing some localised protection for groups of houses and a range of other ways of managing the floodplain.

Bathymetric surveys of the river bed have been

and deposition of sediment within the River Thames. These bathymetric surveys have

Thames silts up again and this is before climate change is taken into account. Dredging

that occurs during a flood. Due to the difficulties and expense of removing and disposing

this Strategy. Bathymetric surveys and modelling will continue to inform our River

The Environment Agency published the Lower Thames Strategy Consultation (September 2009).  Unfortunately the Jubilee River further upstream (the main element of the £110m MWEFAS project that opened in 2002) is still unable to carry its design capacity (215 cumecs).  Design and construction failures resulted in £5m repair costs and a £2.5m out-of-court settlement.  The Myrke Embankment in Datchet is rapidly degrading yet again despite a £1.3m rebuild in 2004, and local watercourses are in desperate need of maintenance.  For over ten years the River Thames has not been dredged for flood defence purposes.  I have no confidence that the Environment Agency will maintain the water courses that they are responsible for........

My view is that in order to properly understand the Environment Agency LTFRMS proposal it is preferable to be aware of the history and consequences of the MWEFAS project (renamed Jubilee River in 2002).

25/12/09 - Response to LTFRMS Consultation from Spelthorne

Unfortunately the Jubilee River (the main element of the £110m MWEFAS project opened in 2002) is still unable to carry its design capacity (215 cumecs).  The Myrke Embankment in Datchet is rapidly degrading yet again despite a £1.3m rebuild in 2004, and local watercourses are in desperate need of maintenance.  For over ten years the River Thames has not been dredged for flood defence purposes.

“We know the Jubilee River works, there is no question about it. Nonetheless, the Atkins reviews do raise important concerns that the Environment Agency is addressing with urgency.” (Chris Birks - EA Thames region director - August 2004)

Below is the EA proposed Reach 3 flood diversion channel route

through Datchet, Horton and Wraysbury (sorry about the picture quality)

through Datchet, Horton and Wraysbury